ON THE RIVER SID – THE DISAPPEARING HOUSE IN THE BYES

This follows on from the general description of the Byes from over a century ago:

This is an account of a house in the Byes which has since ‘disappeared’ – and has been published here with the kind permission of History Group member Phil Lee:

I have two accounts of the house (and the family that lived in it in the Fifties).

The house was probably demolished in 1958/9. Up until then it was occupied by a family comprising an Italian father, his younger wife (maybe Italian, maybe not) and four daughters. In the fifties, the children would have ranged from toddlers to teenagers. The children went to the local schools. It would seem that even in those days, when there was not a lot of money around, this family was very poor.

Lastly, here are further details of this part of the Byes and its ‘disappearing house’ from Phil Lee:

There was most likely only one house in that part of the Byes, so I assume that the accounts that I have refer to the one discussed. It was about 100m down on the East side after leaving the Sid Park Road bridge. This is opposite the bottom of Temple Mews – behind the ‘Gearbox’ – which was the site of the dairy, so that makes sense. The concrete foundations that the guide book says supported a footbridge across the Sid are still visible.

And I have attached two photos. 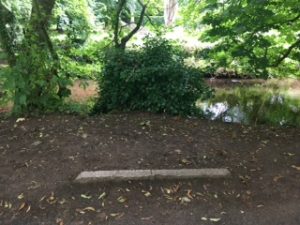 The first is looking eastwards across the river, I’m stood on the path about 100m down from the existing footbridge. In the foreground are two granite kerbs. Next is a concrete structure (covered in ivy) which was probably the start of the footbridge to the house. The bank on the other side of the river is clearly (to the naked eye, not maybe in my photo) a concrete or block wall, which probably retained the land upon which the house stood and accepted the bridge. 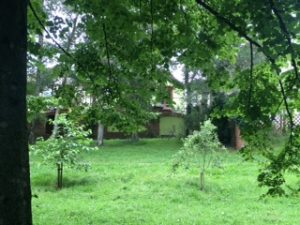 The second photo is behind me, showing the distinctive green fence of a house that now stands on the site of the old diary.

It should be remembered that at that time, the public footbridge was further up the river, more in line with the bottom of Sid Lane, nearer the old ford, otherwise he may not have bothered with a bridge at all.

It is possible that the father was a former Italian POW (there was an Italian POW camp in Sidmouth). One account says that he had a ‘hook’ in place of a hand.

The story is really one of very real poverty, hardship, and not a little unfriendly behaviour by the some (probably a lot actually) of the locals. It must be remembered that there was a lot of poverty in these post-war years.

Just to confirm, if we are talking one and the same property, there is no way that it was demolished in 1945. Someone may have said ‘after the war’ and this got turned into 1945. There are probably hundreds of people in this town who will remember it very well. I’ve just drawn from just two.